The rally in Tesla’s shares has lifted the overall stock market value of Elon Musk’s electric carmaker to over $1.1tn, making it one of the most valuable companies in the world. This year alone it has added almost $475bn in market capitalisation, equal to a Procter & Gamble, a JPMorgan — or two McDonald’s.

However, the real importance and wider footprint of what might be called the “Tesla-financial complex” far outstrips the company’s market capitalisation. This is thanks to a vast, tangled web of dependent investment vehicles, corporate emulators and an enormous associated derivatives market of unparalleled breadth, depth and hyperactivity.

Combined, these factors mean Tesla’s influence over the ebb and flow of the stock market is far greater than even its size would imply. It may even be historically unrivalled in its wider impact, some analysts say.

“We don’t really have the language to describe Tesla any more,” says Michael Green, chief strategist at Simplify Asset Management. “It’s like explaining to a person in a two-dimensional world the concept of ‘up’.”

The Tesla-financial complex is a phenomenon that many investors — whether passive index funds, traditional mutual funds, hedge funds or ordinary retail investors — have no choice but to contend with, given the idiosyncratic force it now exerts over the stock market.

“It stands out like a sore thumb,” says Dean Curnutt, the chief executive of Macro Risk Advisors. “It’s something you’ve got to pay a lot of attention to.”

One of Tesla’s oddest quirks is the fuel that has helped power its rocketing stock market value. Although its stock is wildly popular with many ordinary retail investors, the swelling size and hyperactivity of Tesla “options” — popular derivatives contracts that allow investors to bet both on and against a stock and magnify any gains and losses — has also flabbergasted many market veterans.

The nominal trading value of Tesla options has averaged $241bn a day in recent weeks, according to Goldman Sachs. That compares with $138bn a day for Amazon, the second most active single-stock option market, and $112bn a day for the rest of the S&P 500 index combined. This makes Tesla’s stock more prone to whipsaw movements, because of the “leverage” inherent in using options to trade.

“The Tesla options volume has always been outsized, but it is now huge,” says Michael Golding, the US head of trading at Optiver, a firm active in the options market. “Tesla almost represents a generation. It’s come to represent innovation, at a time when option trading has taken off.”

Tesla accounts for a big chunk of that aberration. In November options trading was 50 per cent higher than stock trading in nominal terms, and without Tesla and Amazon it would have been 20 per cent lower, according to Goldman Sachs. “The combination of a high market cap and extraordinary option activity make Tesla a critical driver,” the investment bank said in a note.

Golding estimates that historically the combined trading activity in US equity options has been between 10 and 20 times larger than activity in the biggest individual equity options market. However, there have been days recently where Tesla’s option trading activity has been five-to-six times the rest of the S&P 500 options ecosystem combined. “The size of the Tesla options market is absolutely enormous,” he says.

The value of options depend on what the underlying shares do, but due to their complex mechanics analysts say the option tail can occasionally wag the equity dog if there is enough activity in them, and even bleed into the broader stock market — adding to its churn and making it harder to navigate for many investors.

Curnutt points out that it is unprecedented to have such a huge stock that is also so volatile, and moves to the beat of its own drum. For example, the swelling heft of Tesla’s stock and options market is one of the reasons why the Vix volatility index has diverged so sharply from actual US equity market volatility lately, he argues. “Tesla is its own animal,” he said. “It changes how markets price risk.”

Who will bet against Tesla?

Ordinary retail investors have been the primary power behind the Tesla options boom, but some of them have more resources to make bigger leveraged bets on Musk’s company than others.

IT billionaire Leo KoGuan recently said that he had by early November accumulated almost 7.2m shares in Tesla. They had largely been accumulated through aggressive purchases of Tesla call options — which give buyers the right to buy shares at a pre-agreed price within a certain time period — and offer a popular route to boost gains. Bloomberg previously verified the growing size of his direct equity stake and options investments, and in September, Tesla’s investor relations head Martin Viecha confirmed KoGuan’s original claim.

That would make him Tesla’s third-biggest individual shareholder, behind Musk and Oracle co-founder Larry Ellison, with a stake worth almost $8bn, and has made him a hero on Reddit forums dedicated to the carmaker and trading. “Leo KoGuan = Tesla God”, one thread declared.

“He’s trading a lot of options, we can definitely see his footprint in the market and he’s inspiring others,” Golding says. “It’s almost as if he’s waving the Tesla flag and people on Reddit see him as someone they can follow.”

Tesla’s fame and the volatility of its stock have also started to make it a component in some structured investment products, such as “auto-callables”, further enmeshing its shares into the fate of the broader financial ecosystem.

Auto-callables are complex savings vehicles — particularly popular with Asian investors — where bankers construct an attractive, bond-like fixed return by selling stock options. Historically they have been mostly options on broad stock market indices such as the S&P 500, Hang Seng or Nikkei, but because of falling market volatility some bankers have started to structure them with options on choppier individual stocks. Tesla has emerged as a popular choice.

“Tesla is perceived as safe because it is big and at the technological vanguard, but it’s incredibly lucrative [for investors] to put into structured products because it is so volatile,” says Simplify’s Green.

The frenetic rally in Tesla has also buoyed money management groups such as Cathy Wood’s Ark Invest and Baillie Gifford, which have bet heavily on the electric carmaker. But there is a flipside. Its gains have left a huge and growing blot on the performance of many other investors with only negligible or modest positions in Tesla relative to its big heft in their benchmarks — or “underweight” in market jargon — due to what many see as its wildly inflated valuation.

US mutual funds focused on growth stocks suffered their worst bout of underperformance in at least two decades in October, largely due to the carmaker’s rally. For US mutual fund managers as a whole, Tesla alone crimped their relative performance by 0.46 of a percentage point in October, according to Wells Fargo analysts, helping turn what was heading towards being a decent year into yet another mediocre one for stockpickers.

“Managers that have been underweight Tesla have certainly been punished,” says Drew Dickson, chief investment officer at Albert Bridge Capital. “It’s been a sizeable driver of underperformance for many. You have to wonder whether a lot of them are now holding it simply due to fears they’re going to lag.”

Betting against Tesla has been particularly painful. Hedge funds that have shorted Tesla shares over the past decade are sitting on cumulative losses of over $60bn, according to S3 Partners, a financial analytics company. Just this year the losses have come to $11bn.

The “short interest” in Tesla — the percentage of shares that have been lent out to and sold by hedge funds — has now fallen from 20 per cent at the start of 2020 to just 3.3 per cent by mid-November, according to S3. A sign, industry insiders say, that fund managers are now reluctant to risk their careers betting against a stock that has defied financial gravity for so long.

Prominent bears keep falling by the wayside. Michael Burry, the hedge fund manager made famous by author Michael Lewis in The Big Short and portrayed by Christian Bale in the film of the same name, last year called Tesla’s stock price “ridiculous” and revealed that he was shorting it. But in October he said he had ended the trade and closed out the short position.

“It’s the original meme stock,” says Green, referring to companies like GameStop that have gained sky-high valuations off the back of social media hype. “Shorting Tesla is just an ego trade at this stage. Tesla has been a primary contributor to destroying the credibility of active management over the past few years.”

Underscoring its financial idiosyncrasy, Tesla stock tends to not be much affected by other market and economic trends, but correlates somewhat with bitcoin, according to analysis by Quant Insight.

At the moment Tesla’s shares seem to be benefiting from a “mixed bag” of factors, such as rising inflation expectations, tighter dollar conditions and uncertain credit markets, but “Tesla spends a lot of time out of [recognisable] macro regimes — unsurprising when it is often driven by idiosyncratic factors like Elon’s tweets,” says Huw Roberts, head of analytics at Quant Insight. A macro regime is industry jargon for how different economic environments can hurt or help certain stocks or sectors. 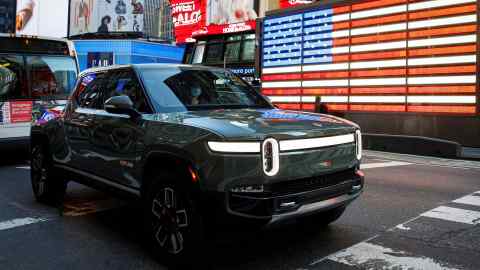 The success of Tesla’s stock has also helped inflate what some analysts and fund managers think is a broader bubble in anything related to electric vehicles. Tesla-emulators Rivian and Lucid are now valued at about $110bn and $90bn, respectively, despite having negligible revenues and no profits.

An index of EV and electric battery companies compiled by the FT has a combined market capitalisation of almost $1.8tn. In contrast, automotive giants Toyota, Volkswagen and Hyundai, the biggest car manufacturers in the world, are worth about $254bn, $135bn and $42bn, respectively.

“There’s obviously a big halo effect with anything electric vehicle-related at the moment, thanks to Tesla,” says Benjamin Bowler, an equity derivatives strategist at Bank of America.

Even Nikola, an electric truck start-up that has set aside $125m to settle fraud charges from the Securities and Exchange Commission over claims that it misled investors about its technology, is still valued at $5.4bn. That is enough to qualify it for the blue-chip S&P 500 index — if it had ever made any profit.

If Tesla’s ascent continues it will further enrich believers, hurt the dwindling band of doubters and drag swaths of the broader equity market up with it. But if it were to fall sharply, it could cause ripples through financial markets that are far in excess of what many appreciate.

Tesla did drop as much as 17.6 per cent in November before rallying once more, without the fall triggering any major ripples. But even this decline only took it back to its October level, and a bigger, more sustained drop could prove more impactful.

“There is a huge, recursive ‘tail wagging the dog’ nature to the valuation of a lot of things these days,” says Dickson. “I’m unwavering in my belief that ultimately the fundamentals are what matters. But over the past few years I can see that the short and intermediate term is far more dominated by flow, momentum, memes and appetites.”

He recalls the financial analyst Ben Graham’s adage that the stock market is a voting machine in the short run, but a weighing machine in the longer run. “In the current environment, I think we’re spending a lot more time voting,” says Dickson.